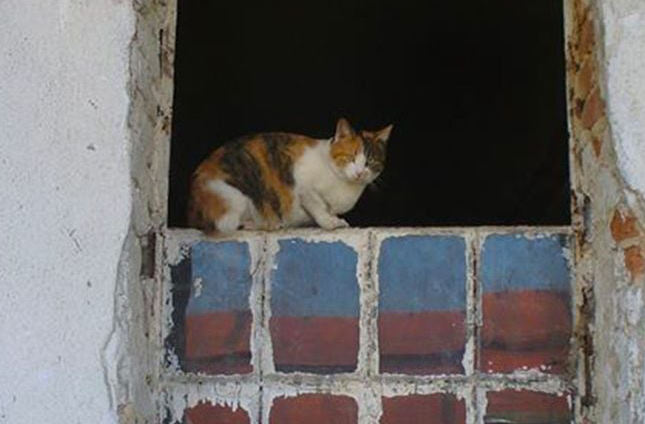 Call me Madam! Yes Dora, I often do 😹
Dora was one of the reasons Jaq stayed in the Czech Republic and she is at least twelve years old. She came to her on a summer day, many years ago, and never left. Therefore she couldn’t leave her ❤
It wasn’t until four or five years later Jaq found out that she was a neighbours cat, that they had moved with her from Prague, and they always wondered what happened to her 😃
Dora prefers living outside, patrolling and sleeping in the hay in the barns. Jaq does not stop her from coming inside during the winter months and during the summer she can disappear for a week or two. She can always be seen around the garden or the gate, waiting for visitors to pet or feed her ❤

Sometimes we feel like we are always asking for help and we have to say that the Psí přání projects are invaluable to us 🙏
Food for the dogs and the bigger projects where we ask for help with things we wouldn’t normally purchase or are beyond our financial capability.
This project is to enable us to test each dog on arrival for Heartworm, a parasite that we hadn’t considered testing for in the past as until the dogs from Centaurus came, we only ever had one case, Siouxsie Sioux.
Siouxsie went on to have the complete treatment and is now 100% heartworm free. Thanks to you!! Without your help we would not have been able to treat her 🙏
Please consider donating to this project so we can keep our critters safe 🥰