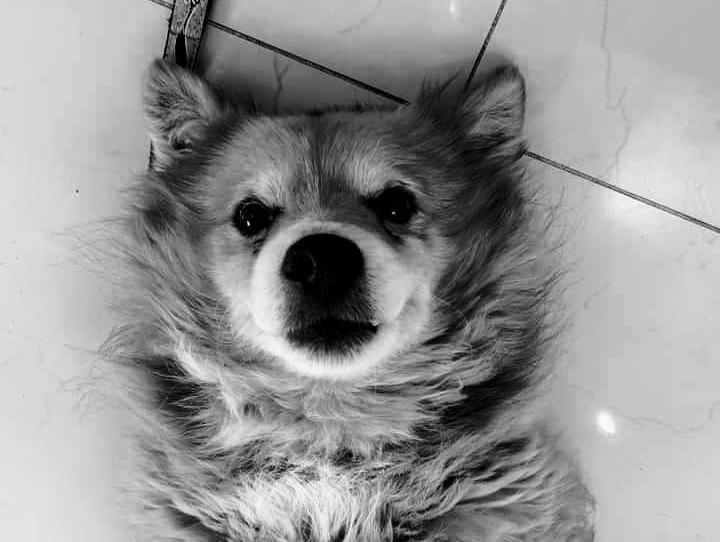 Meet Zeus 🥰🐾
He wins the prize for being the most overweight dog we ever had at Cool Critters! And the most chilled out whilst waiting for his first vet check. He’s wondering why people are laughing at him 🤣 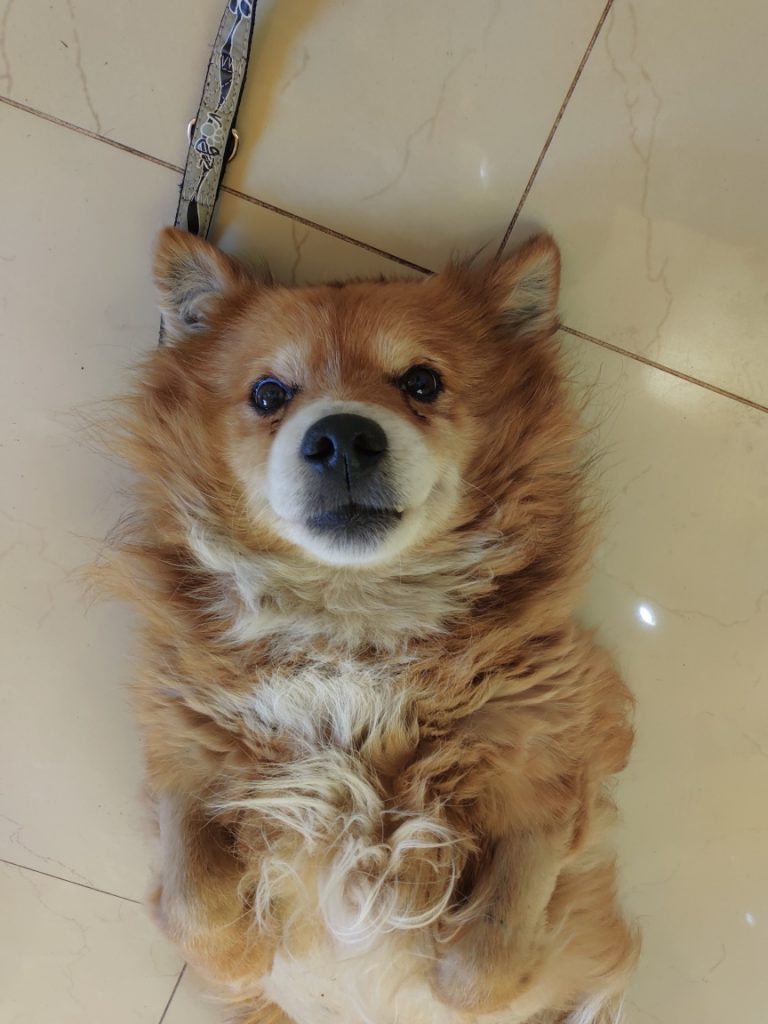 The last time Zeus was at the vet for a health check a heart murmur was detected. Today he visited the cardiologist, we should have the results in a few days. Also, from his blood work, it was found that his kidneys were not in the best of health so he is on Renal food.

Most of Zeus’s problems stem from him being obese. Two weeks ago he was 16.3 kg, today he is 16.1 kg. It’s going to be a long haul to make him lose weight but we will do it! We just need to find something to motivate him ❤️

Yesterday Zeus had an operation to remove a huge mass from his groin area. It was the size of a golf ball 😞 We won’t know what it is until we get the results back from histology. We are hoping that it is a benign cyst 🙏
Our vet bill yesterday for Zeus, Siouxie and Snoopy was 9000 czk 😢 We would be very grateful for any help towards vet bills for these guys 💕🐾💕
Please, if you want to do something kind today, help us to help these dogs and in need of our help. We can’t do what we do without you 💕🐾❤️🐾
https://www.darujme.cz/projekt/1203323?locale=en
Also donations can be made to our transparent bank account:
Account No.: 2201832152/2010
IBAN: CZ2920100000002201832152
BIC/SWIFT: FIOBCZPPXXX 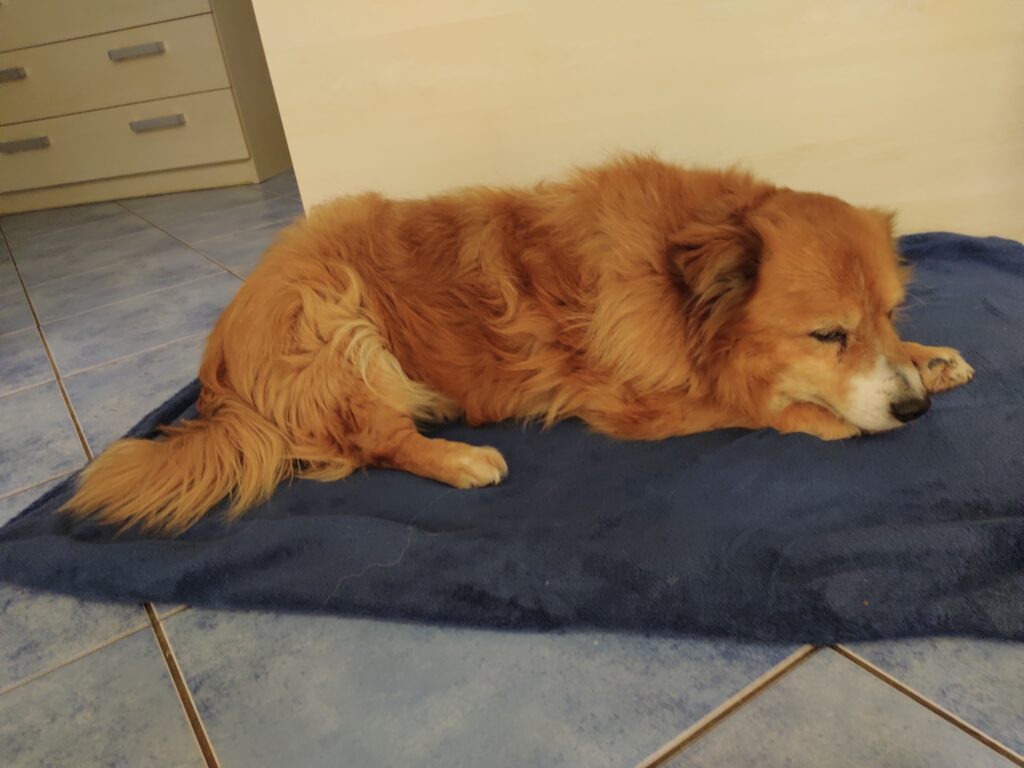 We are really happy to tell you that Zeus has a new home, a permanent foster, with a very wonderful man, Petr 💕🐾💕
When we found out that Zeus had incurable cancer it was our dream and wish that he would live out his days in his own home, with his own human. It was a little complicated because although Zeus is sweet with people, he’s not so great around some other dogs. He wouldn’t have suited city life.
We had a few wonderful people offer Zeus a place. Then one day Petr emailed us to adopt Zeus, this was the day before we actually announced his diagnosis.
Petr had lost his own dog a few months ago, decided he didn’t want another dog and of course, like most of us, changed his mind. He was looking on Pesweb and came across Zeus.
It was a blow for him to learn that Zeus had cancer and he needed time to think about whether he could give him a home. Last Saturday, Petr and his friend visited us and he made the decision that Zeus would be his new buddy 💖
After one week in his new home we have discovered that Zeus is not an early bird, he likes to sleep in until 10am 🙂 He has settled well and we will of course give you updates.
Thank you Petr for being Zeus’s angel and for giving him a wonderful home to live out the rest of his life being loved 😘

Do you remember Zeus? He was a big charmer here and we sadly found out he had an incurable cancer 😢 We wanted to find someone with a big heart to take Zeus home and give him the best life possible. Along came Petr 💞
Zeus has been with Petr for four months now and we receive regular updates about how Zeus is doing. Zeus, like Marley, are Permanent Fosters, which means we will take care of their medical needs. Both are old dogs with severe medical conditions. Today we received an email that is really positive, until the end ☹️ 😢
“Zeus is now walking pretty well, we go for walks almost every afternoon to observe the wild animals by the pond together. He is active, in the morning, he goes out on the street with interest every day, he is still always hungry. He has improved a lot in movement, perhaps his movement testifies to him, he is interested in life, he likes the company of people when someone caresses him, he’s almost too excited to take deep breaths. Some dogs he doesn’t like, some he ignores. When something doesn’t suit him, he lies on his back. I took a video of him in the summer, but I didn’t send it then because I didn’t want to give you false hope, but now I can’t forward it. Sorry. I feel like he’s getting better every day, he’s really enjoying life. As we have agreed, sometimes when he is lying on his back, I run my hand from the ribs to the groin, and now I recently discovered a hard lump the size of 1 crown in the groin at the right hind leg. I’m going to the doctor here tomorrow, I’m very scared”.
Please keep Zeus and Petr in your thoughts and let’s hope for good news 🙏 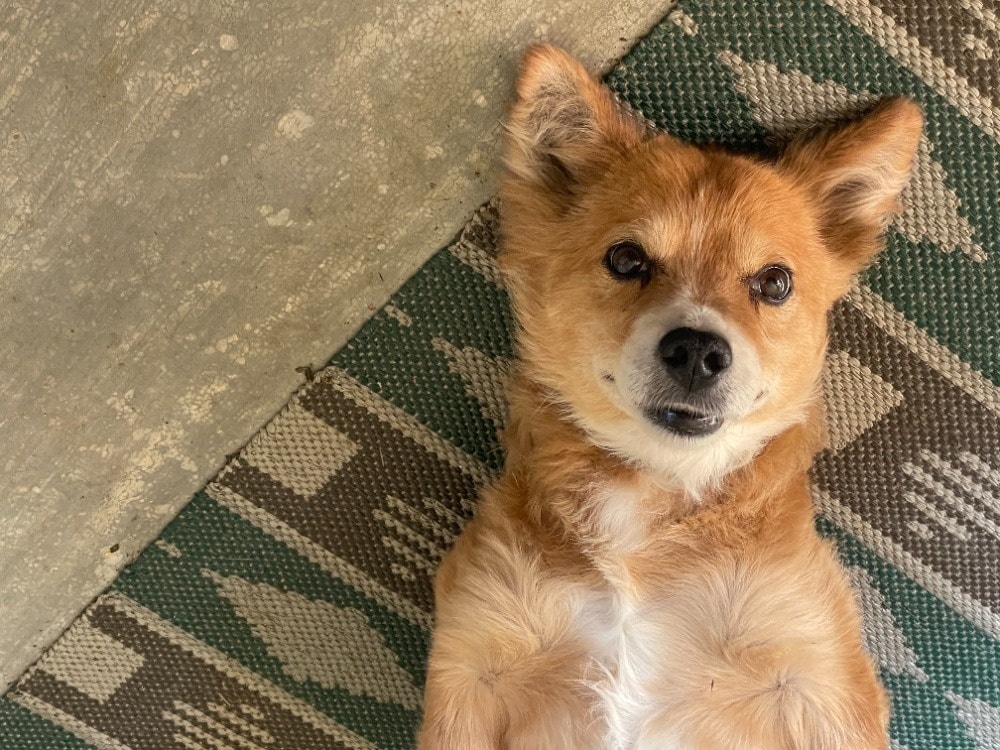 It is with deep sadness that we have to let you know that our Zeus has crossed the rainbow bridge 😢 🌈
Zeus only came to us in March 2021. This dog was really something else, he absolutely adored humans and he would have done anything to get your attention. His specialty was to literally sit on his butt or lay on his back for hours just to look convincingly cute 😍 The only and major problem we had with Zeus was, that he was simply unpredictable around other dogs. Out of the blue he would attack another dog. When he took a dislike on another dog, he was willing to do great damage, so we decided to find him quickly a home rather than locking him away from others.
One weekend Zeus was sunbathing on his back and Jaq noticed that one side of his groin area looked swollen. She found a hard lump. We sadly found out he had an incurable cancer😞
We wanted to find someone with a big heart to take Zeus home and give him the best life possible. Along came Petr 💞Petr had lost his own dog a few months ago, decided he didn’t want another dog and of course, like most of us, changed his mind. It was a blow for him to learn that Zeus had cancer and he needed time to think about whether he could give him a home, but when he visited us he made the decision that Zeus would be his new buddy. Zeus was thriving in his new home and right from the start he was rewarded with a nice groom. Petr loved and cared for Zeus a lot. As the medical expenses for a sick dog are high, we decided that it would be the best if Zeus stayed in permanent foster care at Petr´s place. Like this we were able to cover all the medical expenses.
Thank you Petr for being Zeus’s angel and that you gave him this wonderful home. We could not have imagined anything more beautiful for Zeus than that he was allowed to spend his last months in a home loved by own his people😇🖤 We know how hard this was for you and we cannot thank you enough for your courage and love!!
Zeus passed peaceful away in his sleep, he was only nine years old and we are grateful that he didn’t know any pain.
Run free sweet boy, we miss you 😢